If anyone tells you they slept like a baby, they probably don't have one! Although you wouldn't believe that we don't get much sleep around here by the looks of these photos either. 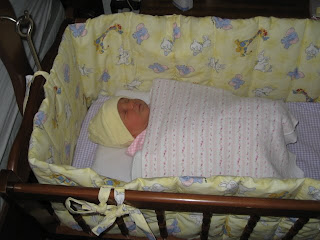 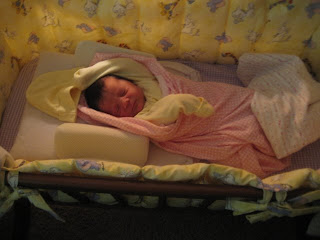 Just like Lindsay, we can't keep the girl tucked and swaddled. She's a little Houdini I tell you! 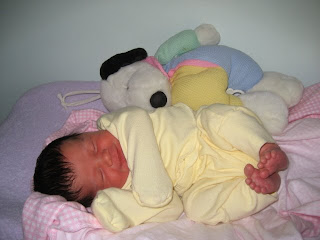 This was just before a rude awakening diaper change. I liked the comparison shot of her and the Snoopy size wise. One day we won't believe she was ever this small! 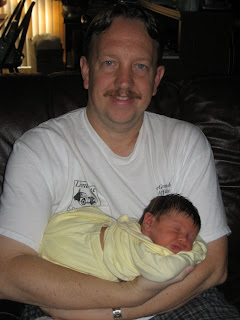 Snuggle up with Daddy 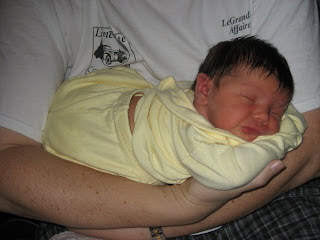 Doesn't she just look like a cherub floating in a cloud?? 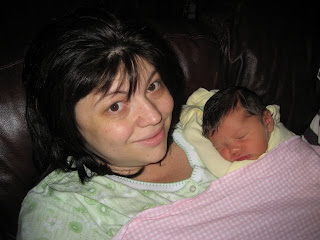 Snuggled up on mommy. Brooke's favorite place is too snuggle up on your neck or shoulder. She's a total snuggle bug!
Just for the record those pics in the cradle are about the only time she's spent there. Brooke does not seem to like her cradle. She sleeps best in the "magic" swing. We borrowed Missy's cradle swing and I tell you it IS the magic swing! She also likes to sleep in her car seat. It's funny, because Lindsay did fine in the cradle and didn't really like the swing or her car seat much at this age. Brooke is totally the opposite. I've been unable to be comfortable in the bed for a while so all of us have been couch sleeping now for a while. Lindsay oddly enough is the only one sleeping in a bedroom these days! However, I had a fat nap today while my MIL was here helping out. I slept in the bed and can actually almost lay on my stomach again! WOOHOO! I know that really doesn't sound super exciting but it's a major milestone when you've had a C-section!
Overall, we're doing ok this week. The girls and I have been pretty much homebodies. We're looking forward to Aunt Kimmie and her girls coming up for a visit from Florida next week. We're also looking forward to going over to Grandma & Grandpa's next week to spend some time with the girls cousins Derek and Adam before they go back to school. I'm still trying to catch up the blog and get more current stuff up. I'm loving the new option to schedule a post so I can do a few at a time when I have a free moment!
More soon!

I tell ya Chris...I just can't get over how beautiful Brooke is. You are right she does look just like a little angel. And I am not sure but to me it looks like she looks alot like her Mommy right now!!

Glad to hear that you can almost sleep on your tummy again. Trust me from one tummy sleeper to another....I GET how important that would be!!!

you are doing great - i can remember the 1st night i was on my tummy after Tatum ... it was WONDEFUL!!! haha I am so ready for that!

so i just caught up on a bunch of stuff. Glad you're okay and things are well. I love all the pics.

Get used to that tired look around the eyes.

Those teenaged years are coming.