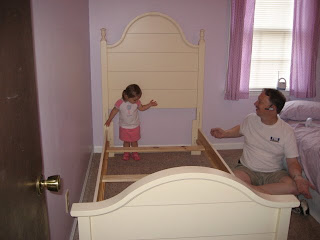 Here are some first pictures of the new bed being set up! 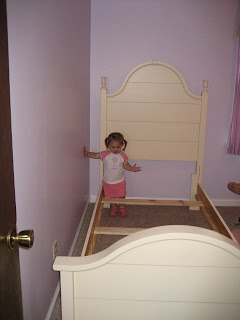 Lindsay calls it her house! 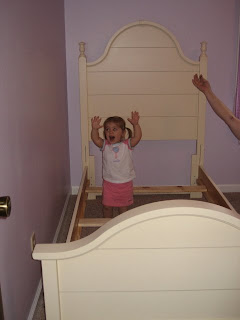 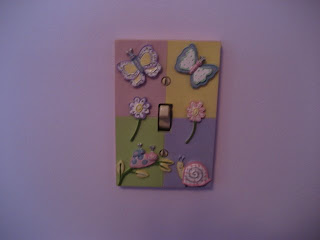 Here's my 1.99 EBAY score. I thought this light switch cover was PERFECT for her room! 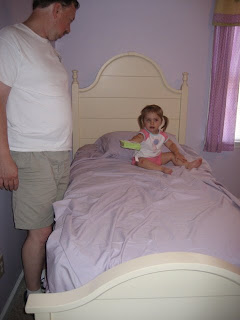 Lindsay has book and is ready for nap...however we still weren't! She's not happy with us as we put her down for her nap in the crib. She keeps telling us she wants to sleep in her bed but it didn't happen. I think tomorrow we'll try again since it will be a little lower key around here!

I'll post more pics again when we get the room a little more pulled together but it surely is coming together nicely!

Mike Update: We met with the urologist yesterday and the function in his left kidney has improved some. It went from 5% to 18%. They would like to see 20-25% but in a two week period that isn't bad. They will probably do another function test down the road but for now they're ok with what we have. The next step is Mike is going to meet with another urologist in the same practice on Monday. He is the "new guy" so to speak and he specializes in laproscopic surgery. He will meet with Mike and review his CT Scan. The decision that has to be made at this point is whether or not this doctor feels he can get into the area of Mike's RIGHT kidney and remove the mass that is there. The mass is hanging off the kidney but it's high and in the back underneath the liver. It's an awkward place to reach apparently but if anyone can do it this would be the guy. If he says no, then he and his partner will do traditional surgery and go in and remove it. Same result either way but it would be a MUCH less invasive procedure if they can do it without having to cut him open again. We're planning the surgery either way to happen 3-4 weeks after I have the baby. Enough time for me to be somewhat recovered yet enough time for Mike to also be at a good place by the time I go back to work (12 weeks). It's basically going to depend on what kind of surgery he has on how we time it. So we should know more on Monday. Then we can focus on baby! Please continue to say prayers for Mike that this thing is non cancer and just a cyst. We have already been told it's suspicious for cancer but we're hoping for the best case and if it is then we're very happy to be getting out which ever way they have to do it!

Hope you are all having a great 4th! Stay tuned for pictures from our firework celebration tonight. Crossing our fingers for no rain!!!

Love the big girl bed ... Can't wait to see her sleeping in it!

Great news on the increase in function ... I will continue to pray for no caner!

I love Lindsays new BIG girl bed! It is very pretty and she looks so proud of it.

I saw the last post too and am glad that everything turned out alright. It won't be much longer now.

Hope that you guys had a great
4th!!!

what a very grown up bed! :) i love it. i think it's going to look so great when you get it all fixed the way you want it. and, of course, the room won't be complete without her BEAUTIFUL "Lindsay" frame!!! You're going to LOVE IT!! :)