What Goes Around Comes Around...

...My clever title to tell you about how Lindsay aquired this Sit-n-spin. About four years ago Mike and I bought this toy for some friends of ours daughter's birthday. Low and behold they passed it back down to us earlier this year. Gotta love an investment like that! Who knew when we bought this for Anna we'd be watching our own daughter play with it four years later. 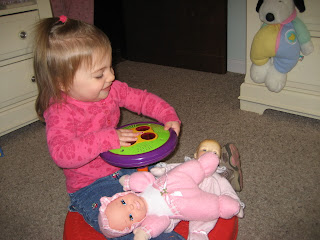 Can't you tell she LOVES IT!?! 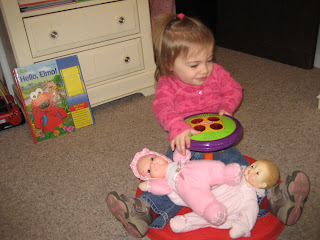 Lindsay likes to give her dolls and Barney and Mickey rides...we're not happy til EVERYONE is able to RIDE! 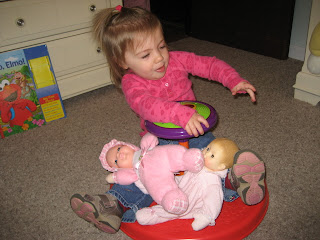 Mike is just amazed that she can do this by herself now. Just a few weeks ago we still had to spin her. Now she FLYS on this thing. She even does the "crossover" with her arms as she spins herself! I tell you if Sit-n-Spin were an olympic sport...we'd have a prodigy on our hands!
Posted by Chris at 10:44 PM

I am so gald she wants to make sure everyone has a turn. That is so sweet!

Too funny! That is exactly what Morgan used to do on hers....all the babies had to have rides. She is growing up!!!

That is SO cute! That's awesome that she can do the "cross arm" I don't think I ever could do that! haha. She is coordinated!

SO SO SO Stinking cute - love it! Missed you while I was gone - how is the itching?! How you feelin?! Everything still going good - going back to read all the posts I missed!

That's funny! I love seeing the pictures, since you told me the story in person.

I had fun today. We'll definitely do the sale thing again.