More pictures not in order...GRRRR!! 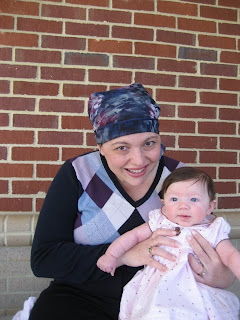 Blogger is posting my photos in backwards order so excuse my storytelling. These are pics from last Sunday after church. These dresses I bought the girls were for their first pics together which we still haven't done. But maybe we'll get around to it soon! 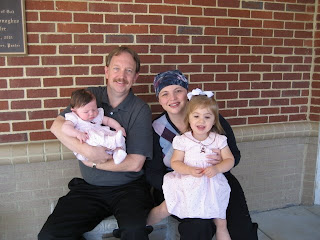 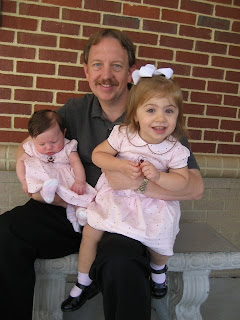 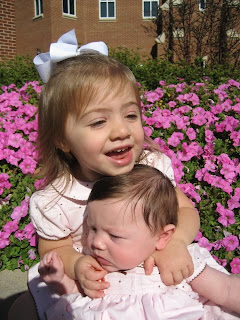 Lindsay holding Brooke and Mommy trying not to get in the photo and keep Brooke from getting her first taste of cement! 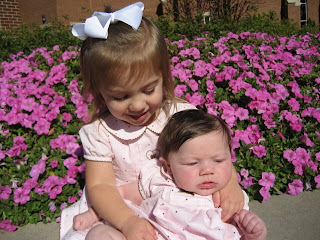 Doesn't Lindsay look so sweet?! Such a good BIG SISTER! 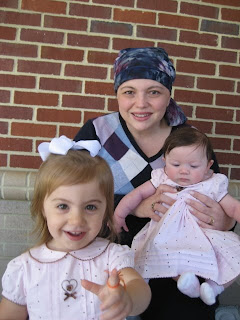 Lindsay is showing off her spider ring she found on the ground. 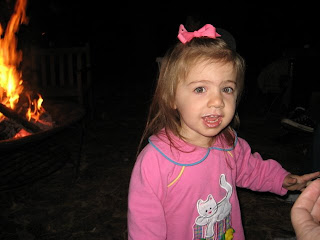 Bonfire at our block party on the Saturday after Halloween! 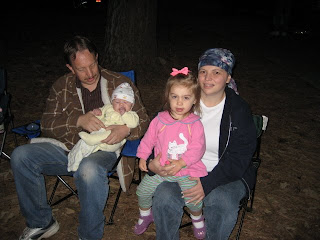 The fam hanging out with the neighbors! 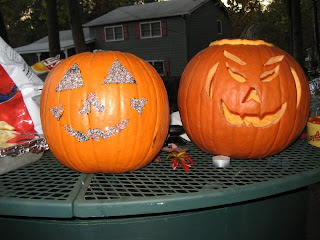 Daddy & Lindsay's pumpkin on the left. Daddy's carved pumpkin on the right!
Things at the Bresnan's have been a little crazy lately. I've been going through some issues that I didn't expect and didn't come clean about at the time. For about a week I was experiencing some seizures that were affecting my speech. For roughly five minutes I would not be able to talk. It seems that after some medication switch ups they have gotten the seizures to stop. However the last two weeks I've been having major emotional outbursts for lack of a better word. I'm scheduled to see someone for counseling but not until the 20th of the month which based on my medication I ought to be doing much better by then (of course). I guess I've been hitting the emotional side of things this last couple of weeks all things considered with the kids I had to shut down that aspect of everything while I was in ICU to get through it. So now it seems a lot of stuff is finally coming to surface and I'm having to deal with it now. Along with starting back to work this week which has been fine but exhausting! People have been fabulous there though it's been overwhelming to see everyone again and I'm such a walking miracle it's hard to feel normal again. Just to let you all know where I've been in bloggerland. Please continue to pray for us and think all those good thoughts we still need it!!

Cute pictures. Sorry blogger is giving you troubles. I hope things all get better soon and glad to hear work is going well.

Sorry you are going through a rough patch-with all you've been through its to be expected. Sending prayers your way.

I never upload my pictures in order. I always just click and drag them where I want them to be afterwards!

I am so sorry about the rough path that you had hit. I will be praying for you guys. The girls looks so cute. Brooke is your "mini-me".!

Chris, I'm sorry about your emotional times. You've been through a lot the past 4 months, not to mention right around 16-20 weeks postpartum is usually when a little pit of ppd sets in. You are very strong and I hope you are able to work through it through counseling.

Sorry to hear about the seizures. That's scary! Glad to know you were able to get things worked out with your meds.

Your daughters are absolutely adorable.

Girl you are in my prayers I hope that it all gets back to some what normal soon! Try to take it easy at work, accept all the help they offer and relax.
I will be praying for you as always!

I am so sorry that you have been dealing with so much. At least your family is with you. Those gorgeous little ones could cheer anyone up! They are absolutely adorable and Brooke looks just like you!!!!