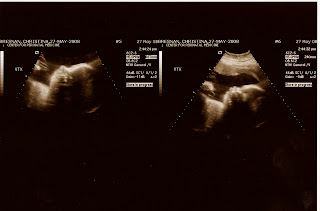 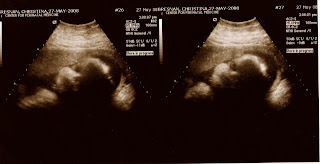 Face-looking right at the camera! Check out those cheeks! She's storing nuts for the winter!
Here we go, the update blog post on my baby first and then Mike's. Ha!ha!
Baby was moving and grooving today. Got some lovely shots of her face as you can see. Don't forget you can click on a pic to enlarge so you can really see. Baby looks very healthy and all is well. HOWEVER, the estimated weight according to the ultrasound is...are you ready for this????
5lbs 13oz (plus or minus 15oz)
So this means technically she could be just below five pounds or a nice chunk over 6! No wonder I'm having such back pain and shortness of breath now. GOOD GRIEF. Initially I didn't worry when they told me she was big. The docs told me Lindsay was going to be 8-9 pounds and she was 7# 8oz at 39 weeks 2 days.
Doctor Stone seems to think because her cheeks are so plump and her belly is so fat that maybe I do have a slight chance of having or developing gestational diabetes here at the end. He was nice about it but told me to back off the carbs a bit and do more protein. Um, yeah...pizza cravings?? I hate to think of the next six weeks on pizza restriction.
Anyway, I see my OB tomorrow and get to deliver that bit of good news to her. I'm bringing the photos to show her! Who knows, maybe we'll get pushed up a week on the C-section. I mean if she's supposed to gain 1/2-1 lb a week and she's already 5+ pounds I could have a SERIOUSLY big baby in 6 more weeks! Now I have to convince my OB that I NEED her to fit Lindsay's albeit hand-me-down, spectacular wardrobe!!!!!!!!! 'Cause that is what's important right? LOL!
The doc also has decided that I get one more peek-a-boo with her in 3 weeks at my 35 week mark! That is awesome since Daddy was getting his own ultrasound today at the same time as me. However, I have him beat on measurements and "miracle status"! His pride and joy is only 2-3 millimeters and we're still not sure if he's passed it on to the tidy bowl man yet!
Thanks so much to all of you for your humorous comments and well wishes to Mike. I've been reading them to him as he labors on the couch.
He is doing a bit better today. His color looks much better and he's eating and drinking now nausea free. The urologist is scheduling him for an MRI to see if the stone has passed or not and to give a look at the overall area. Mike feels he may have actually passed it last night. He felt a lot better this morning but apparently something such as a kidney stone can mess up your whole digestive tract. His pain may be residual pain from all the puking and the stone etc.
Hopefully they'll have him scheduled in the next day or so. For now, he's taking it easy and Lindsay is spending one more night over at grandma & grandpa's house. We'll see how he is doing tomorrow before we bring her home. THAT has been the hard part on us. I haven't seen her since Thursday night and I'm starting to get REALLY weepy about it. BUT, I know it's best for all of us right now for her not to be home. She's in awesome hands and it won't be long now. I'm just so thankful we have such awesome family around to help out with her! She's TOTALLY on toddler vacation!
Well, I think that's about it for tonight. Thanks again and stay tuned!!
Posted by Chris at 7:38 PM

I am so glad Mike is doing better. THose are great Ultrasound photos.

I love the ring that name has to it. it's a nice ring, don'tcha think? hehe. ;) oh, i am relentless.

Girl-i say enjoy that pizza!! yum. i craved chinese food around the clock when i was pregs with Joe.

Mike-rest up! and feel better very soon. sending you many well wishes from your friends here at CuppaJoe! :)

So glad Mike is feeling better - I know you miss your princess, but you are right it is the best right now! Hang in there it will all be over soon!

I had a US today too - just one for fun - so glad it is still a boy! haha
I will post tomorrow with the picts!

I know that you miss Lindsey. I cried after Luke was born and Kade had to stay with my parents for 4 days. It seemed like forever, but he was being spoiled and did not even miss us!!
Glad to hear that Mike is feeling better. Just like a man trying to compete with his pregnant wife!!! Just kidding! ;).
Looks like Baby Bresnan is doing very well and will be here before you know it. Maybe she will arrive earlier than you think!

So no more puking for Mike? That means he is out of the 1st Trimester! Way to go Mike! :-) Those are some great US pics of Baby Bresnan! You do realize if you move up the C-section, you have less time to pick a name, right??? Just name her Lyndsey. ha-ha. Could you imagine???

I LOVE those cheeks! You better get to crackin' on a name for the little one.

I am glad to hear that Mike is feeling better. My first kidney stone was the worst, after that I don't know if you are used to the pain or what but you can somewhat function. At any rate it sounds as though the worst part is over. Yea!!! You are both about ready for delivery!

The u/s pictures look amazing! I think I get another one around 34 weeks. I can't believe they are guesstimating she weighs over 5lbs! WOW! They say that babies gain 1/2 pound a week during the last month, so she could be a 9 lb baby. Yeah for the c-section! ;-)

Sorry to hear about Mike and is little one. I wonder if it will be a boy since you are having all of the girls? hahaha! Good luck taking care of him and I hope it passes soon so he can feel better.

Good luck to both of you!

She looks adorable! Both my girls had chubby cheeks in their u/s pics and still do and I love it! Lana even still has them at two. Good luck avoiding the carbs. I never could manage it - especially not pregnant. Then again, Lana was only 5lbs 12oz when she was born so I have the opposite problem with my girls not being big enough. BTW - I subscribed (finally) to your blog so I can actually keep updated.

I'm with Melanie...I want to know this little one's name! She is too cute with her chubby cheeks- ultrasound technology is amazing, no?

Glad she smiled for the US. She must have read my email to you, in-utero. Glad to hear that Mike is turning the corner. Sorry I didn't get the chance to call you back today, it's crazy busy since next Friday is my last day with BMT. Wooo Hoo!

Ah hem...but Katie @ Cuppa Joes is not the only one whose been pushing for Katie Marie, LOL! Not to mention the fact taht even Mike's own Mom and Sister loved it and I have first hand knowedge of that from the shower, tee hee.

LOVE these photos, can't wait to meet my new Niece Katie too! :)