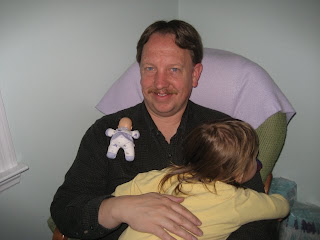 This picture was taken tonight after Daddy rocked Lindsay AND her baby to sleep. Mike said she put her baby on his other shoulder, patted her back and turned her head to the other shoulder and OUT SHE WENT! So sweet!
Lindsay may finally be grasping the concept that this baby is eventually coming out. Over the weekend she patted my tummy and said "baby come out?" We really haven't talked much about that yet with her so I imagine maybe some of her teachers have talked about it. She has been sporting her "I'm gonna be a big sister" shirt to school lately. Anyway, her funny expressions now are "baby come out and play" and my personal fave "baby's cookin' "
SO CUTE!
We had a blast at the zoo and I have some great pics. I'll try to get those up in the next day or so. I've been trying to rest the last two nights after work since I WAY overdid it with all the walking at the zoo. Apparently, I'm having major round ligament pain and Monday I could hardly walk without grunting and wincing. It made for some funny looks at work but I made it through the day! I'm doing much better today and I broke down and bought one of those compression maternity belts. It's AWESOME! I just got it today but I think it's going to make a difference. My OB told me that each pregnancy increases the ligament pain and it happens sooner. Ok, so THE PROCRASTINATOR in me would have liked that information oh say...20 weeks ago or so??!!! Ugh. So now I'm trying to schedule for some family to take Miss Lindsay the next few weekends so we can make some headway on the big girl room. Thankfully, the prom stuff will slow up a little in May and Mike will be more dedicated to the house stuff.
I have a feeling this little girl is going to surprise us and make her appearance before my scheduled C-section...(which we haven't scheduled yet). I could be wrong but we'll see.
MBkimmy...I emailed you the link to the double jogger I registered for so check it out.

Happy TAX DAY everyone. I think I've updated all I can for now!
Posted by Chris at 10:15 PM

i really can't wait to see the new girl room. you're in the home stretch, chris! it won't be long! hang in there!

So...since baby #2 may come earlier than planned...will you be able to update us from the hospital???

I am with Andrea, are we going to get updated from the hospital?!?! I love seeing new babies! Lindsay is too cute! She is going to be a great big sister!

That picture is adorable!

Big sister in training. I love it! She will be great. Good luck with the double stroller. It took me forever to pick one..to wide, not wide enough, no baskets, small baskets. I thought Steve was going to kill me!

Don't worry. I'll either be borrowing a friend's lap top for the hospital or I'll have someone post for me. It's all good!

Sorry about the ligament pain. I haven't had any problems with ligament pain but am getting back pain! I'll have to remember the maternity belt if it does happen.

We are in the final stretch, 12 weeks and our little ones will be here! How exciting!!!

I won't have access to a computer from the hospital so I will have to wait until I'm home to post pictures and do an update.