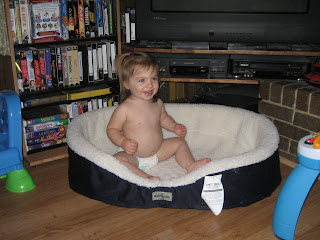 Well, Lindsay thinks so at least! Tonight I went to buy Freckles a new dog bed as she is now officially being banned from all the bedrooms in the house. (more about that in a few) 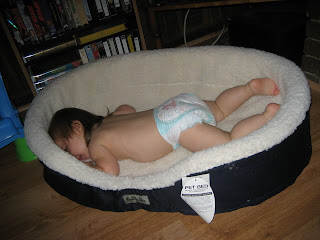 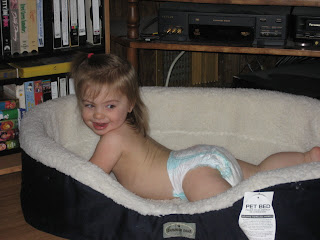 So far the only soul in the house the new dog bed is a hit with IS Lindsay. Freckles won't have anything to do with it. Within 30 minutes of it being in the house the cat climbed in it and pee'd. Great! Not too mention Midnight has officially taken over the Elmo chair and Lindsay and her are at odds over that. Every time Lindsay sees the cat sleeping in her chair she tries to pull her out by her tail. It really gets ugly.
Freckles is being banned from the bedrooms because she keeps having "accidents" in my guest room which is soon to be Lindsay's big girl room. I refuse to have barely two year old carpet ruined! I am starting to understand why five years ago I used to hear my brother in law chant "pet free in 2003!" Of course it's 2008 and they still have two dogs and a cat too so go figure. However, my patience with the furry kids these days is running thin.
This week has been crazy busy and FULL of doctor's appointments. I will update on all that more soon. For now, know that all is well with the babe on the way. We go for another ultrasound on Monday and I have one picture from this week to put up which I'll save for my next post. Lindsay's ENT appt went well and we are going to go ahead with the surgery to get tubes. She is having that done at the end of the month!
That's all for now from the Bresnan "dog pound". Please say a prayer that my dog will put her butt in that OVER PRICED bed I bought her and sleep tonight. (last night she paced the floors because she was mad that she was kicked out of "her" room)
HAPPY FRIDAY!!!
Posted by Chris at 9:10 PM

oh, my gosh, those pictures are hilarious, Chris! and your Freckles tale is cracking me up! too funny, girl.

oh, and i am glad all went well with the ENT. you will be so glad you had this done. Tubes are a godsend!

Good luck with the tubes. I hear they work miracles! And those pictures of Lindsay in the dog bed are sooooo cute!

We just bought Charlie a new dog bed too-his old one was getting pretty bad. The first one I bought he didn't like so I took it back-the second one just came in today and is just like his old one-Surely he will like this one?!?!

That is cracking me up! Lindsay is too cute! You will be SO glad that you went ahead with tubes. They will make for one happy kid....and parents too!

Don't even TALK to me about "furry kids." Grrrrrrrrrrrrr :)

I think i missed something ... can you explaine to me why you are having so many ultrasounds?! I wanna!!! Haha I only get 3 total unless they suspect problems?!

Glad all is okay - with babe on way!

I have heard that tubes are WONDERFUL that they really help a lot!

Kimmy...long story short I'm considered high risk because I'm over 35 and I had an ectopic pregnancy just before Lindsay. We went back to our inferility specialist when we found out we were prego b/c they monitor hormones, progesterone, HCG etc. I was worried about another ectopic. They followed me the first 11 weeks and they do ultrasound every week. Now I will only have them in perinatal at the hospital every 4-5 weeks through around 28-30 weeks. We did our 3D with Lindsay at 28 weeks I think. Also my OB usually looks each visit too. I guess it's just the age/high risk thing although everything is just normal! It is nice to get so many though!!! I would hate to only have one or two the whole pregnancy!