Ok, so I'm finally catching up with all the pictures in my camera! Here are some pics from our morning last Sunday. Breakfast with Santa at our church. 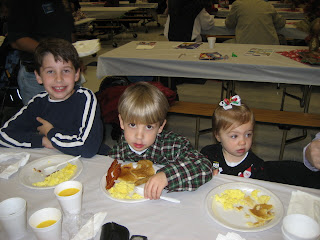 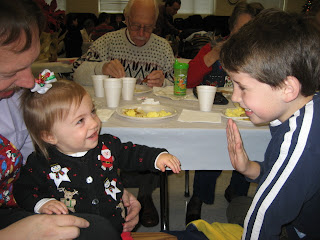 Lindsay loves to give "five". Derek has been trying to teach her "high five" and the ever popular "up high, down low, too slow" 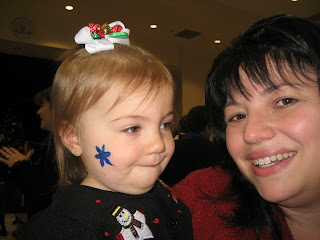 The boys wanted Lindsay to get her face painted. She didn't want to at first but once she got her snow flake she wanted more. 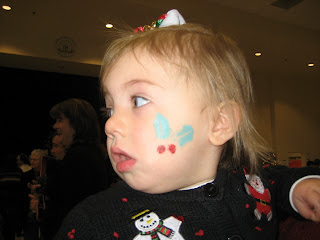 So, then we got the holly berries! 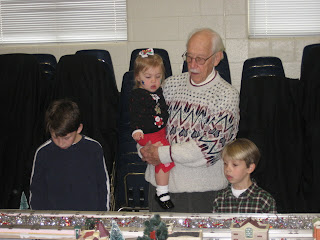 The boys and Lindsay get some grandpa time in at the train table! 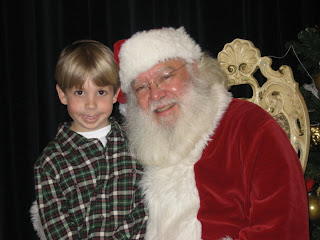 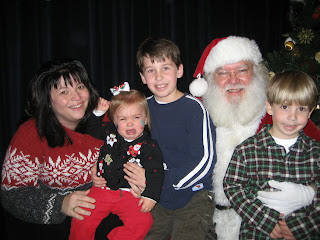 Here is our attempt at getting Lindsay and the boys with Santa. I had to get in the picture too and she still was pretty mad.

Oh well, I think that was the last Santa torture attempt this year. We went to Publix the next night to pick up a few groceries and Santa was there. Lindsay saw him a mile away and started saying "NO, NO, NO". We didn't push it. The poor girl might start having nightmares.

After the breakfast Mike's parents took Lindsay for the rest of the day. It was SO nice because we were able to go get and decorate our Christmas tree. It was such a push this year to get things ready around the house. I haven't felt well and then got really sick on top of the pregnancy stuff. Mike has been pushing through and fighting being sick himself. We're in the home stretch now! Tonight we're off to go with my family to see "A Christmas Carol". I have a little more wrapping to do and as I type Mike is making the house warm with the aroma of baking CHEX MIX! YUMMY!

We wish you all a VERY MERRY CHRISTMAS!

Sorry this thing was acting weird... did n't mean for that to kick in 4x... lol

Sorry this thing was acting weird... did n't mean for that to kick in 4x... lol

Renata is cracking me up!

Merry Christmas to you, Mike, Lindsay and Bun in Da Oven! May you all have a very blessed and joyful holidays! Much love to ya from all your friends at CuppaJoe! :) The Sausage wishes your family good tidings as well. :)

Merry Christmas to the Bresnan Family! Here's hoping your nausea stays far away!

I let my cat out of the bag - over at my blog! Thanks for all of your support!

I love the shots of Linds and Derek and Adam and Santa...adorable! Look like lots of fun! :)