More pics and my SHOPPING HIGH 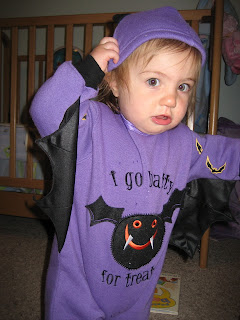 Just because you all know how many outfits Linds had for Halloween I had to show off one more. This came from my family in Orlando (Kimmie Kay's Sister Shelly) as a handme down from her kids. It says "I go Batty for treats". It's sort of more like Pj's so she wore it as such. 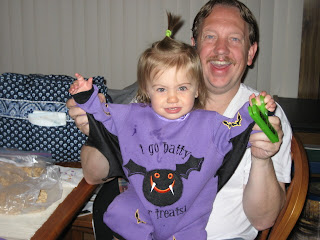 Showing off the "bat wings" 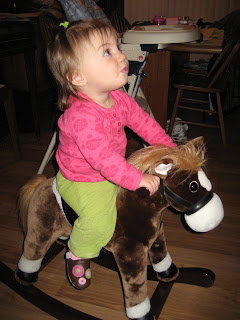 Here is Lindsay trying out what is going to be one of her big Christmas gifts this year. I scored this on the Gwinnett Consignment sale for 15$. He makes neighs and galloping noises and sings the song Home on the Range when you press his ear. This horsey goes for much more than 15$ and I was very happy that my friend Christi spotted this one for me. We've been looking for months at horsey's and this one was exactly what we were looking for and for a steal! Oh, we're using horsey in our Christmas photo shoot (or at least I have a dream) so we're allowing her to play with horsey now to get comfortable with him. After our photo shoot (next Sunday) horsey is going to disappear until Christmas. So nice that we can easily do that this year and it's no big deal to her. It's not like she'll notice really. Can't you just see him with a big red bow sitting in front of the tree on Christmas morning!? 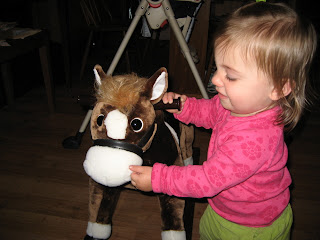 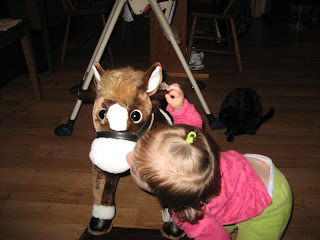 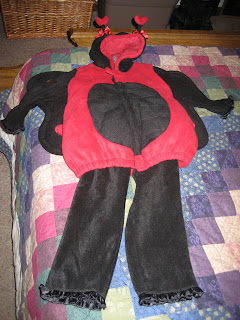 So here is my shopping high for today. Mike and I went to Old Navy tonight and the Halloween Costumes are 75% off. I scored this Lady Bug for next year. I know it sounds crazy but I paid 8 dollars for Lindsay's witch on consignment and I got this BRAND NEW WITH TAGS for 4.32 after the sale and my stuff and save discount! GOTTA LOVE IT! I also bought one in the next size up for Lindsay's BFF Graison. I figure even if she ends up not wearing it, ie...I find something cuter next September, I can EBAY it for goodness sake for more than I paid easily! I'm stoked! 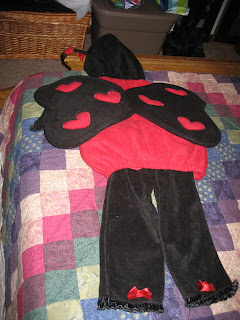 Here is the back of the costume. So if you really know me and you know how much I love hearts, you now know why I had to have this costume! Just precious. I debated on a Lady Bug this year so I think I'll be good with it for next year. Oh, but let's hope for a cooler Halloween next year otherwise she'll ROAST in this thing.
Finally, Lindsay would like to send a BIRTHDAY SHOUT OUT to her BFF Graison! Little Miss Graison is 2 years old today! We're spending all day Sunday at her house for her Fall Festival themed Birthday Party complete with Pink Barbie Jumpy House. I'm sure we'll have tons of pics next week from that party. Also, the adults are looking foward to getting some time in the giant Jumpy before the party starts and the kiddies arrive. That ought to make for some blog material I'd say!
Have a great weekend all!!

cute costume and great deal. Have a fun party and good weekend.

So cute with the horse!!! I'm glad Mike was able to fix it! Can handyman Mike come to my house and help me??? I have a list a mile long!!! I'm willing to pay :)

Love her in Hanna's old costume, cute! the lady big for next is adorable and that is quite the bargain! I can just see her and G matching next year trick or treating...wish I could be there. :)

Her costume is ADORABLE! And I love the one for next year! And I've posted!! After I read your comment, I immediately had Daryl take my pic so I could update. I've been a very bad blogger!!! That is like, a mortal sin for a 38 week pregnant blogger NOT to blog! haha. Hope you are having a great day!

Shopping high indeed! Its always so hard for me to shop early for David 'cause I never know what size he is going to be, but you bring up an excellent point...if it doesn't work, just ebay it!

Girl- that ladybug outfit is awesome. great find on your part. and the horse IS a total steal! i can't wait to start doing the christmas pictures myself. i always love doing the card every year! i hope everyone posts theirs so we can see'em, ya know? have fun at the party today! we gots one too! have a good one!

I love an after holiday sale!! I am sorry I have not been keeping up with you. I am gald to see you had a great Halloween!!

Christmas pics already??? Goodness I have to get on the ball!

Good idea with the costume buying. I saw one at the Disney Store that I would love for Morgan next year, but it wasn't on sale very much!