I have come down with a sinus infection or possibly strep (doc said strep test was borderline) so I have been home the last two days. Every time I get up from my comfy spot on the couch I come back to this... 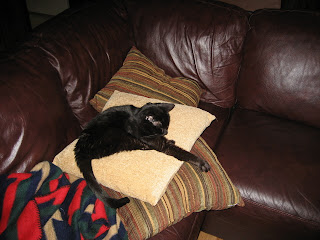 ...this is Midnight. She is the Queen of the house & place warmer! 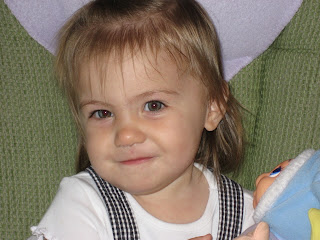 A random pic of Lindsay that I love, taken on 10/10/07. Her first year we took a picture of her each month in her rocking chair. 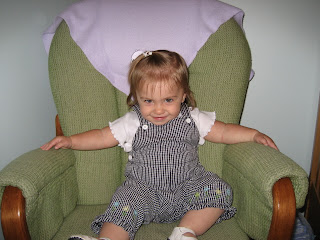 I had not taken one in a while so in order to also get a pic of her in these cute overalls I used the rocking chair excuse. She looks sort of sassy in this pic. 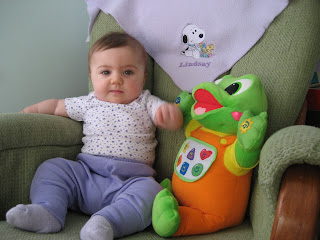 Just ten months earlier a comparison shot. Lindsay 1/10/07 at six months of age! WOW! She's barely bigger than Baby Tad!
So here is the update. Lindsay's doc visit went well overall. Her ears are both clear. Although, she had fluid in her left ear but it wasn't infected. (which says to me she ought to have another one oh, right around say THANKSGIVING....grrrrr....)
Anyway, we'll see but they will not even TALK about tubes until she's 2. However, if she continues with the ear infections and she has more than 4 in six months they will go ahead and refer us to the ENT. So, that means if she has one more by the end of the year we'll be talking. Anyone want to take odds??? I'm fine with it. I hate for her to keep suffering like this and everyone says tubes make it so much better! For now, we have our happy go lucky baby back and she's sleeping through the night. Let's hope she doesn't catch what mommy has now!
We have a quiet weekend planned. Nothing on the schedule other than our Christmas pics on Sunday. Yes, it's early but apparently the next two weekends will be horribly busy at the studio and I don't want to put it off until December. Otherwise I may never get them addressed!
Hope everyone has a great weekend!
I'd also like to say our thoughts and prayers are with the Gordon Family!
Posted by Chris at 9:24 AM

Sorry you aren't feeling well. Evan had the fluid/no infection thing recently too. Hope your weekend is good!

Love that 2nd pic of Lindsay! You definitely captured the moment. Hope you feel better soon!

hate that you aren't feeling well. hope you get to feeling better real soon. i have been taking airborne out the wazoo. the little kiddies have been snotting and sneezing on me all week. one good thing about my job-i build up some serious immunity to alot of shizz.
cute pics of lindsay as always!! have a great weekend!!