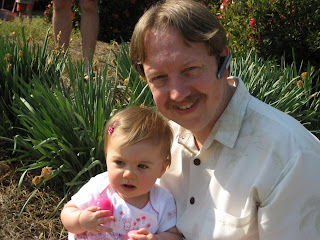 Daddy and Lindsay looking for eggs. We have to remember to have daddy take his blue tooth off when we're taking pictures! Lindsay had a bit of a melt down when we put her in the grass. For some reason she doesn't like her feet touching it and she's afraid of trees....weird? I don't get it. When Mike is holding her in the front yard, if he lets her touch a branch on a tree she cries. It will NOT be good if she doesn't get over that. 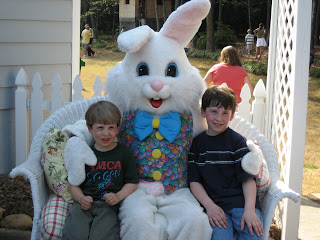 Adam & Derek with the Easter Bunny 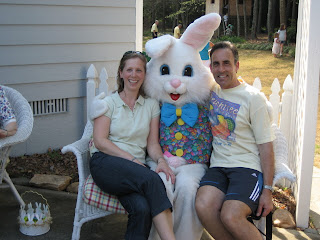 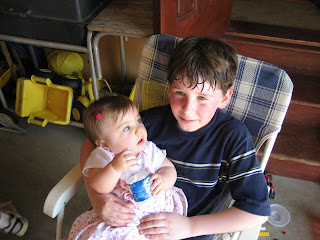 I wanted to post this pic on the birthday page. Derek took time out from his friends at his party to get a little Lindsay time in. It's so sweet when he asks if he can hold her. He's a very good big brother and cousin!
Mike and I took Lindsay to Town Center mall this morning for Easter Bunny pictures. Had we known that such a great Easter Bunny was going to be at the neighborhood party we would not have bothered. At any rate we didn't get pics at the mall because Lindsay was having NOTHING to do with him. We tried a couple of times to put her in his lap. We sat with the bunny with her in our laps and that ALMOST worked til he reached out with his furry little paw and touched her arm. She had a Melt down. A serious melt down. That was the end of that for the day, so she thought. I'm sure when we got to the next party and she saw him again she thought she was being stalked. Stay tuned. I have one more post to go and it's the lovely pics we did get of Lindsay and E.B. himself!

Hey this is really nice...and the photos are great...thanks for posting this...and for some more fun on Easter just visit my blog on Easter Greetings sometime and check out all that i've posted there!!!