Another FUN picture and an update 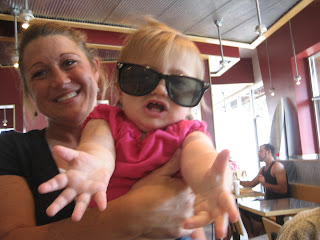 Hello! I hope everyone is having a great weekend. I have been meaning to blog about the daycare drama but I wanted to wait until everything was settled and not so stressful anymore. In a nutshell the week before last we decided it might be time to move Lindsay out of the daycare she has been in since she was twelve weeks old. We've been thinking about it really since June but we've been trying to give them a chance to show us some improvement. It just seemed that turn over of the teachers in the toddler room was an issue and Mike and I were not pleased with what we've been seeing in regards to the demeanor of some of the teachers. I have to say that in the "INFANT ROOM" we loved her teacher. This teacher probably kept us there an extra three or four months. We sincerely will miss her and so will Lindsay. However, we began to feel that our child was not really being enriched there. Basically we felt we were paying for general babysitting. We also witnessed some "yelling" at the children and that was NOT going over with us at all.
On the Monday before Labor day our daycare decided to switch around all of the kids rooms. They moved the infants to what used to be the two year old room and put the big kids up front. It was a rotten decision but on top of that they moved the kids DURING the school day. Not only that but they were CLEANING around the kids during their play time. All of the babies in Lindsay's room were out of sorts. Every kid in there was crying when we picked Lindsay up. You just don't disrupt their routines like that. No letter went home to the parents. They didn't wait and do it over the weekend. The two year old room needed some SERIOUS work in the cleanliness department and now the BABIES were in there. It just didn't go over well. This basically was the proverbial "straw" for us. The very next day I left work early and went scouting around for other day cares. We had already been referred to one specifically and it was just as close to home just the opposite direction. I tell you all, after one visit I was ready to pull Lindsay out immediately. Mike and I decided to give it a week and do a couple drop in's at both day cares to see what all was happening and observe the newest toddler room teacher in her current daycare. What I hoped would happen did. Mike took Lindsay for a visit on Thursday to the new prospective daycare. He was so blown away by all the stuff they were doing with the kids we decided Friday would be her last day.
So Lindsay started her new daycare this past Tuesday and it has gone really well for the most part. We love all the stuff she is doing. She has had art every day (she never had that at her old school) and music and circle time which she loves. She also gets to go on the playground twice a day. They even take the infants outside every day at new school. Apparently that is a law and we never knew it. The babies don't go outside at all at her old school. Of course drop off has been dramatic. She cries every day. Thank the LORD ABOVE Daddy does the dirty work. I PICK UP! However, she cries when she sees me in the afternoon. It's that little guilt trip she gives me making sure I don't think she really likes it there. She is adjusting very well though. She went from barely eating and no nap the first day to napping and eating regularly most every other day. She's been particularly moody every night this week as well. We discovered on Friday night the extra reason behind that. Lindsay cut FOUR teeth this week on top of the daycare trauma. Poor baby cut THREE molars (which we were only watching for one) and finally cut the fourth bottom front tooth. So our little girl has been quite the trooper this week. Mommy as you can imagine has been way stressed out. Tuesday was the worst. It was so hard to know that Mike was dropping her off and leaving her with total strangers to her. Even though we visited there with her three times prior to starting her. I can't imagine what she was thinking. I am just praying that the weekend doesn't undo all our progress and that Monday is not a scene. If any of you other mom's have any advice or comments on this or you've been through a daycare switch feel free to share. I'm just glad the worst is over and we sincerely believe we did the right thing for her growth and development.
Current Tooth Count is ELEVEN!! WOOHOO!
Posted by Chris at 10:20 PM

I am so sorry about all that, Chris. i don't blame you one bit for pulling her out. she will be loving her new place in no time. hope all goes well with it. have a great sunday, girl! :)

Glad everything went well with the daycare drama. I sympathize with you on the teeth but I found a teething tablet at Kroger last night and we slept all night, for once!

I have no advise ... since Tatum is only 12 weeks know I have no prio experiance ...
however I am sure that the very first day of daycare was horrible and the first week was very hard also ... she will get very used to it! She will learn to love it as you do!
PS I am proud of you for pulling her ... I know that was hard, but I think it needed to be done!

I know you feel better now that all of that is over, Linds will be fine! Great pic of her and Donna. :)

I agree! I would have pulled her too. Did the daycare say anything when you left? Oh, and smart move on the drop-ins. I don't have any daycare experience, but that is for sure the best way to see how they really act when they are unexpectedly visited!!

I know it must have been tough to go through a change when she was probably settled, but it sounds like when she gets settled in at the new place she will be even better. I think you made a wise choice..change is never easy.

Thanks for all your support guys. Caron- yes Mike went and did the withdrawl and they had a long talk. We had previously had a "sit down" back in June so they had to know it was coming. We left on good terms and they invited us to drop in any time to let them see how Lindsay is growing. I think they knew they could not compete with the place we switched to.

Eek! That's rough when the people you trust to take care of your precious child don't seem to care as much. I hope the new place turns out to be wonderful and I am sure Lindsey will adjust soon.