Katie from CUP OF JOE tagged her blogger pals to come up with 7 Random things about themselves. I am inviting those who read my blog to do the same. Tag YOUR IT!

Here are my 7 Random things:

1. My high school band marched in the Macy's Thanksgiving Day Parade in 1986. I didn't get to go (don't start groaning all of you who know me I'm not going into all of the "poor me" details) but I am determined to someday go to the Macy's parade and spend Thanksgiving weekend in NYC having a blast!

2. I have an obsession with John Travolta (that dates back to Welcome Back Kotter) and have almost met him twice. However, I didn't make it up close and personal. This failure only adds to the obsession. I have also written OPRAH (since he's her BFF next to Gail) and am patiently waiting for her "PEOPLE" to call me to be on one of her shows when he's on.

3. If I hear the song Jack and Diane come on the radio, no matter where I am or what I am doing I have to turn it up and sing at the top of my lungs! It's just something about that song!

4. I met my husband at Northside Hospital while I was working and he was a patient. His mom worked at NSH many years ago and now our baby was born there. 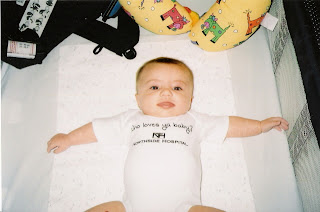 5. I almost broke up with Mike when we were dating about two months because "I can't find anything wrong with him and he's too nice". Thankfully I did not screw that up!

6. I moved to Atlanta in 1991 and missed my friends (boyfriend who I broke up with b/c I moved) so badly that I drove to Orlando and back in less than 24 hours to go to a party and see everyone. I left on a Saturday afternoon, skipped out on work, partied all night and drove home on no sleep in time to be at dinner at my families and never told anyone I left town. That was crazy!

7. I grew up in Florida and never ate seafood until I moved to Georgia and met my husband. I had no idea what I was missing!!

Ok, so those are mine. Not quite as wild as some. I'm sure some of my friends can top this!
Have fun!
Posted by Chris at 1:11 PM

what? no convictions? no crack addict ex-boyfriends? no confessions of once being a pole dancer? oh, chris! come on, now! hehe! That's crazy about that road trip you took in 24 hours! And i think it's way cool how you met your husband. this was fun!

Ok..you'll love this! Matt's mom was an extra in "Urban Cowboy" with your man and she has pictures from the set. Whoa - that hair and outfit! I'm with you on 'Jack and Diane', too!

I knew some of these already, yay me.

Christi...that is AWESOME! TOo funny. Tell Matt's mom next time she comes she has to bring those pics so you can show me!!!