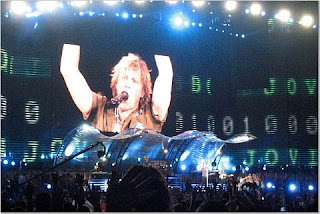 Photo compliments of Renata! Photo taken from the Have a Nice Day Tour in New Jersey...lucky dogs!!!
WOOHOO....been waiting all season for some JON!!!!!! Tomorrow night on Idol it's BON JOVI NIGHT! DO NOT CALL ME after 8pm....we will not be answering at the Bresnan's.
Lindsay went to TWO Bon Jovi concerts in utero. She can't wait either!!!!!!!!!!!
It's a slow blogger week. We went to the park for dinner tonight and it was great. Totally brought the camera and didn't take a single picture. Mike made dinner while I was commuting home from Cumming...ugh. We packed up the cooler, the baby and some toys and had a blanket picnic tonight from 6:30-8:30. Gotta tell you it's the best thing on a Monday night. Lindsay had a blast eating dinner while playing. It was the best of both worlds for her. Eat, play and undivided attention from both mommy and daddy.
Milestone Update: Lindsay is officially on the move...BACKWARDS...but on the move. She can crawl backwards faster than our border collie can get around these days. She also can get back up into a sitting position from her belly. Today is the first time I watched her do this and she did it more than once. She's a pro. I guess she figured this out on the floor at daycare because Lord knows we don't put her down at home. Ha!ha!
Posted by Chris at 10:07 PM

Livin' on a prayer, baby! woohooooooo! i did not know Bon Jovi was gonna be on idol this week. that's pretty cool, man.
Sounds like LIndsay is just a rockin' and a rollin' herself these days. it won't be long now until those first steps! get ready, girl! :)

WOOHOO!! Bon Jovi Night! LOL! You are in all your glory! Too funny about the pic! Go Jon Go!

You'll be chasing her around the house soon. I'll be watching idol tonight

I am watching with you!
Talk to you about it all tomorrow!