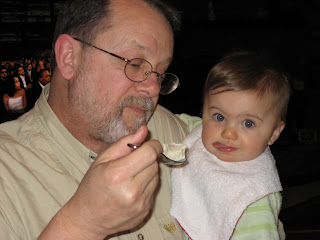 Uncle Steve will give me ice cream! Look at the size of that bite! 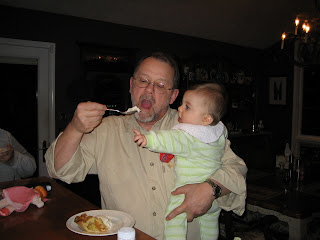 YUMMMM!!! Give me some of that! 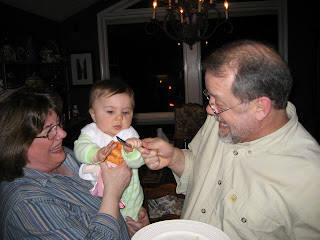 I know who's gonna win this fight!

Lindsay has gotten to the point that she KNOWS what the good stuff is when we're eating it. She was not about to be left out of apple pie and vanilla ice cream. Since she was already introduced to a small amount of vanilla at Christmas (thanks Uncle Ray), we figured Uncle Steve could share a little of his just this once. Ha!ha! Apparently, we're having a growth spurt because all this fuss was after Lindsay had already had Ham, green beans and her own fruit dessert! Little Piggy! Little Piggy! A good time was had by all and Lindsay went wee, wee, wee all the way home!

I love the first pic with her little tongue out and the one with her grandpa. that one is too precious! she looks so happy and content sitting in his lap. looks like a fun trip!

Girl I could do a montage of all the pics I have of her with her tongue out. I may have to do that one day! Ha!ha!

You've posted a ton that I haven't seen since I've been a lazy blogger all around. Cute pics